Around Here - Creating a Culture of Making 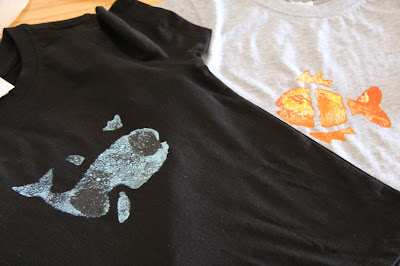 Little Tree has a couple of little boys who he has known since he was around 16 months old.  They met at a newly formed playgroup and all us mums appreciated each other enough to keep things rolling.

Now that my boy is getting ready to turn 4 he has known these friends for more than half his life.  To say they are tight might be a bit of an understatement.  They know each other well enough to be happy to share, when they're in the mood, or push each others' buttons with wild abandon.


Meaning they either play beautifully or it's all out war
:-)

Needless to say these are Little Tree's, chosen, heart people so I knew Christmas should not go unrecognised.

It was with that thought I approached this because I really wanted his gift to have some of him with it.  I wanted it to be something he had spent some time on and had a real level of choice about.  It was with these thoughts in my head the stencil T-shirt he made himself earlier this year popped up.

My criteria was met as wanted something made not just bought and the end product was useful.  Over and above that he could have full freedom of choice as to the mix of colours, who got which design  and it is likely to appeal to a 2-4 yr old so hopefully he will get a couple of smiles when the wrapping paper comes off.

He's done the making as part of his advent activities.  I got a couple of surprises along the way as I assumed he would choose the vehicle stencils again he but definitively chose sea animals for each person.  He also put quite a bit of thought into who got what stencil by relating it back to something in their life.  One of his little buds loves orange and has the goldfish locker at preschool,  the other loves turning over rocks looking for soldier crabs when they play at the estuary (so he chose a crab stencil).

This quick easy activity hasn't required much in the way of time.  It is totally forgiving when it comes to accuracy, a plus as precision is not the way Little Tree rolls, as long as you use a nice wide tape to tape the stencil down to the shirt.  Best of all it has produced an end result that Little Tree has been proud of and his happy to give people he loves.