Where I Live - The Wagtails are Nesting 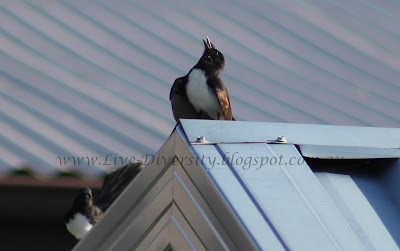 Email ThisBlogThis!Share to TwitterShare to FacebookShare to Pinterest
Labels: Life, Photography, Where I live

Life cycles - Not Just for Animals 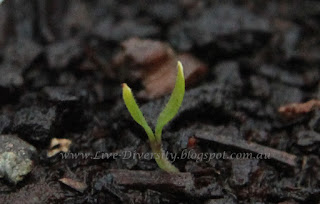 I've been itching to do some more life cycle work with Little Tree.

The one artwork he has done in the last 6 months that I would say is considered and age appropriate was when we were reading a book called Boobook, about Boobook Owls, and he decided he wanted to map the life cycle as it followed through the book.

It wasn't just his normal expression of lines.  It had an Owl with a face and claws.  It had the nesting hole with some eggs along with some other features that although totally unrecognisable without explanation were actually a considered attempt to visually represent something solid.

We have done matching cards on the life cycle of a lady bird and it got at least a few uses, over about a week, before he decided he was done.

The one time I have seen really solid repetition from him was when I introduced the frog life cycle puzzle.  He must have done, pulled apart and redid that puzzle at least 3 times in a row when it was first introduced.  Then there was varying amounts of the same over about 3 or 4 days until he decided he was done.

Thus I knew there was an interest so the question was how to cultivate it.  He had already done chickens from eggs at preschool so I didn't see any point repeating it.   I couldn't find any easy source of the normal options (ladybird, silkworm, caterpillar, etc) available here so I started nut out what we did have available.

We had plants so I decided to run with it.

I had grown one quite unusual heirloom variety of eggplant last year.  It got started late and when we around mid year the plant with about 3 fruits got quite badly damaged.  The eggplant survived but failed to set any further fruit and in the chaos of the move got firmly neglected.

It was around September when I looked around and decided I needed to do something with that pot.  The eggplant was alive and kicking, despite the neglect. Unfortunately the damage meant it wasn't going to be something that would run for a second year so I harvested the fruit with view to seed saving then replaced it with a small rosemary seedling that needed a more visible position and a much bigger pot if it was going to make it through this coming summer.

The first step in making this about life cycles was to harvest the seeds from the fruits.  One afternoon we both sat down with an eggplant each and pulled it apart.  He only lasted about 10 to 15 mins and took about 7 or so seeds but it was the concept of harvesting seeds I was aiming at not necessarily the execution.  After carefully sorting the seeds from the flesh and leaving them to dry for a few days I put them in a storage container in view to planting them soon.

Um.. well, two months later the first lot went into soil.  Then failed to germinate.  Now eggplants like things hot and we haven't been cold but we also haven't been hot so I was mildly concerned but not totally ready to give up.  In the end I decided on the "throw the kitchen sink at it approach" and planted about half the seeds we had collected all in one go.  I figured that if the fruit had rotted down that is the type of dispersal that would have existed.  To say it was overkill for the box is being circumspect but I was a bit desperate for at least a couple of seedlings to demonstrate.

Thankfully in the last week two have germinated.

One is looking pretty so, so.  It wasn't strong enough to unclamp the seed casing off it's seed leaves. This is something I have generally found a bad sign but it was the first, and at the time only, one so I do something I don't normally do and unclamped the casing using my fingers. About a week later the seed leaves are tiny and a yellowy green so I don't hold a lot of hope.  That said I am of the firm belief that plants want to live, so generally try and give them a good feed and see what happens.

The second one that turned up in the last 24 hrs is looking good.  No sign of the seed casing, beautifully stretched toward today's drizzly sky.  I'll be a lot more comfortable once it moves into producing true leaves but I think I have a goer here.

They've both been potted into a nutrient rich soil mix to try and get some size on them then into the garden they will go.

My plan is to go from seed harvest to seed harvest this season.  When I put the seedlings in the garden I want to add a little laminate life cycle card to highlight the stages and bring steps we have already done to mind.

As this project will have been going around 6 months at the point of completion I think this is going to be crucial to give it a solid foundation in reality. 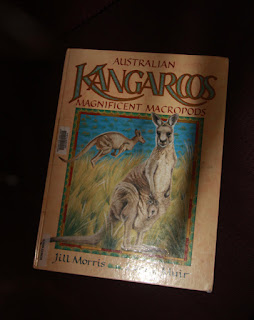 For various reasons we haven't really been getting a lot of new books from the library.  Those that had been chosen got read once maybe twice before sitting in our library book collection until it was time to return them so it's been nice to find one that is going to stick with us for a bit.

I don't know how many books Jill Morris and Lynne Muir have author/illustrated together.  I am aware of two, the other was about Australian Owls, and both have been highly enjoyed around here.

As with the other, Magnificent Macropods is beautifully illustrated and full of facts with a one page write up on each animal.  What I like with this series compared to many non fiction books is that it  doesn't take any adaption for those will shorter attention spans as each animal has rhyming verse that points to an interesting fact about the animal being highlighted.  Little Tree also really enjoys the last pages where the relative animal size is drawn smallest to largest to try and give some real world perspective.