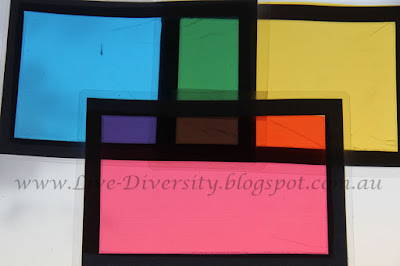 Colours and colour mixing is something that I keep presenting.  Up until this point it's all pretty much been pouring liquids and mixing them to make colours.

That's all well and great.  Over the months we have done a lot of those activities and he really enjoys them.  He is also starting to get the gist as the last time I asked him what two colours I needed to mix to make a third he got it right.

That said I wasn't confident that he truly understood that whatever the form of the colour that you would end up with the same result.  I really wanted an activity that underlined colour not form.  Thus I have been eyeing off colour paddles for a while but I just couldn't justify the expense so I have been putting it all in the too hard basket.

Then I saw Kylie at How We Montessori print on transparencies so it got moved to the maybe basket.  The problem was I didn't know if you would get the same result from a laser printer (I don't own a personal printer so my resources are done at the local print shop) and I didn't know if they would be happy printing on transparency given the price, for them, if it all went wrong.  Thus it again got shelved.

Some time in the last week I had a flash of inspiration - cellophane.  That said not straight cellophane because that would last 3 seconds in this house - laminated cellophane.  In the end I also decided that borders were useful.  I found they really differentiate when the sheets are overlapped making it really clear that the new colour is a mix of two by creating a firmly defined window.


How will these last?

I honestly have no idea.  As I used photo sized pouches they are pretty strong with regard to accidental damage.  The problem is I am not at all sure if sustained sunlight will wash out the colours in the cellophane.   Once you have bought your cellophane though the cost of repeating is basically a few cents for the laminating pouch.
Posted by Belinda at 21:08