How to Tank a Tray - Continent Animal Matching Australia/Africa 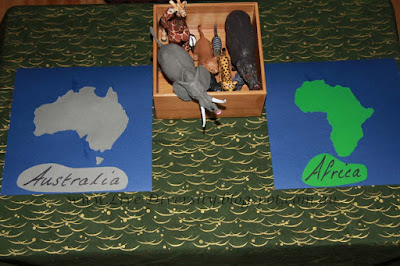 I'm writing, for myself, as I always make an error in this area and it needs to stop.  This mistake always hinders his interest and interfears in Little Tree's engagement with the tray.


What do I do?
I fail to include a control card.

Little Tree isn't a child that is going to calmly ask for a demonstration of an activity then focus deeply on the process while said demonstration is being performed.  He is more likely to signal some interest in the tray by moving the pieces off the shelf then his ability to do the activity totally independently isn't there he will simply walk away to forever loose interest.  Even if by some chance you do manage to do a demonstration he will  more than likely be climbing the furniture rather than looking in the direction of the person demonstrating.

In this case I had totally talked myself into the fact that he knows what Australia looks like, thus there was only one unknown that being the continental shape of Africa.  He is more than able to name every animal included in the sorting box.  In my view he was well aware of the Australian Animals being Australian.

What happened?
Well it seems that he was able to name Africa,  I am truly not aware of him ever seeing it before so he may have been making an assumption from the animals provided, but not Australia.  With a bit of prompting he got Australia without me actually having to tell him but as soon as that happened I knew I was in trouble. He then put the Hippo on Africa, then decided the possum lived there too.  I asked him if he was sure the possum went there as Grand dad goes looking for possums, attempting to prompt him to self correct, and he held his ground that they lived in Africa so I let it go not wanting to totally trash his confidence in his ability to do this work.

Unfortunately it seems that one question had done exactly that.  It was then he started playing with the lion cub, insisting on going to get the male lion out of his models draw to create some imaginative play scene.

That was the last interaction he chose to have with the continent cards and he hasn't done anything with the tray now for over 3 days except use a couple of the models for his "zoo" this morning.  I'll leave the tray out until the end of the week just to be sure but right now it looks like my need to ask that question due to not including a way for him to self correct at the end has been the death of this particular activity.

If it was the first time it had happened I wouldn't be happy but it would be easier to give myself some grace.  As it is NEED to remember this as some version of it happens all the time and spending time on providing activities then setting him up to not be successful is not doing either of us any good.
Posted by Belinda at 21:25