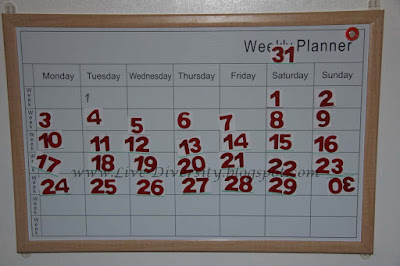 -August-
Little Tree is really starting to get a handle on the fact that time passes, both during the day and during the week. During the day his markers are Morning tea, Lunch, Afternoon Tea and Dinner.  He is now solid on both hands at the top of the clock being Lunch time, he is even getting aware of the fact that if we haven't had lunch right on 12 that times after 12 might also be pointed out to be lunch time.  This one is a bit vague as although he is getting there he isn't totally solid on the little hand being the valid marker in this little scenario so sometimes he will mistakenly decide it's lunch before 12 but not in the dogged "is it lunch time yet?" way that led up to this need for understanding.

We have 3 activities during the week that always happen on specific days (preschool, dad day and music class). These activities that repeat every week have really solidified for him that time is not this vague amorphous thing. It was him often asking is it "preschool day" that made me realise that it would be useful to him to really see the days passing and that regular events reoccur on a 7 day pattern.  Thus the Calendar was born.

I have had this weekly planner for a while and planned to use it for mapping household jobs but the planner got lost in the move and didn't turn up until about a fortnight ago.  About the same time Kylie at How We Montessori put up her inspiration post  about calendars and I decided that was a much better use for the tool.  I first started out with just adding a dry erase number every day, we started about mid August,  but of course the first thing he did was rub them all out.  Within 24hrs it was all unreadable so I accepted that tempting a 3 yr old with something like that was really just asking for trouble.

In thinking my way though I remembered I still had some magnetic sheet designed to go through an inkjet printer.  As I no longer had a printer I decided to start with some ply wood numbers from the local discount store, that I had painted, then glued them on. I figured this gave a really robust set of numbers that would have texture if he decided some time in the future he was interested in tracing them with his finger.

To this point it's been so far, so good.  He has mostly really enjoyed the routine of matching the dry erase day number that I write up there, the night before.  He is even starting to get the idea of numbers bigger than 10 and that they might conform to some type of pattern.   Something that really seemed to be unfathomable before so not only does this seem to be working to clarify the passage of time but also that numbers are useful in more than just "counting".

I expect I will be adding a few more things, in the future, like the year and possibly some type of weather magnets but right now it seems to be working for him in this very simple and stripped down state. 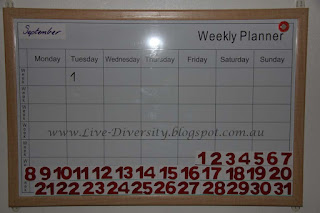